Vancouver Island inventory levels are at historic lows which is likely partially responsible for the decrease in sales in July 2016. Other considerations for the slight slowdown is the normalization of the market which will allow inventory levels to build in the upcoming months. Overall, sales are up 19 percent over the same time last year. We’ll be watching the market response to the new Foreign Buyer Tax. You can view the full market report here. 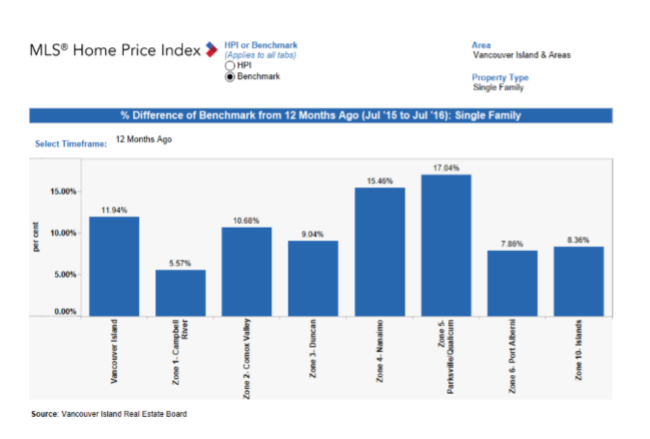 NANAIMO, BC – Home sales cooled somewhat last month but posted a 19 per cent increase over July 2015.

Economic factors fuelling the provincial housing market are strong consumer confidence, robust retail sales, and high employment growth. With GDP sitting at 3.5 per cent, British Columbia’s economy continues to lead the country. Concerning the new Foreign Buyer Tax that takes effect today, Muir says it is too early to know whether it will affect home prices on the Lower Mainland or spill over into other parts of the province.

“The housing market is usually slower in the summer months, but we believe that sales might be beginning to normalize,” says Cameron Muir, BCREA Chief Economist. “If so, that would allow inventory to build up and ease pricing pressure a bit.”

Margo Hoffman, 2016 VIREB President, agrees that the housing market typically cools during the summer, and this trend likely accounts for July’s lower sales figures. However, limited inventory continues to be a challenge for buyers and REALTORS®.

“Although we’re in a seller’s market, homeowners are holding back because they’re worried they won’t find another home to purchase,” says Hoffman. “We’re beginning to see more inventory, but buyers snap up available properties quickly.”

Low inventory is also contributing to rising benchmark prices for single-family homes, townhouses, and apartments. Despite those increases, however, the Vancouver Island housing market continues to be affordable compared to the Lower Mainland and Victoria.

“Home buyers in the VIREB area have a variety of price points as options,” adds Hoffman. “The benchmark price of a single-family home ranges from a low of $209,600 in Port Alberni to a high of $443,800 in the Parksville-Qualicum area, so there is a price to suit almost everyone.”

Hoffman agrees that at the moment, there is no way to say whether the Foreign Buyer Tax will affect home prices in the VIREB area. For now, the housing market remains competitive, so connecting with a local REALTOR® is crucial to ensure you develop a winning strategy for buying or selling your home.