The Vancouver Island Real Estate Market is still HOT! High consumer confidence is showing in the real estate market on Vancouver Island, resulting in record sales and a seller’s market, keeping us very busy! There are more houses coming up for sale and buyers continue to purchase them quickly. If you’ve been contemplating selling, call me soon, as now is the best time to put your house on the market. You can read the full real estate market report here. 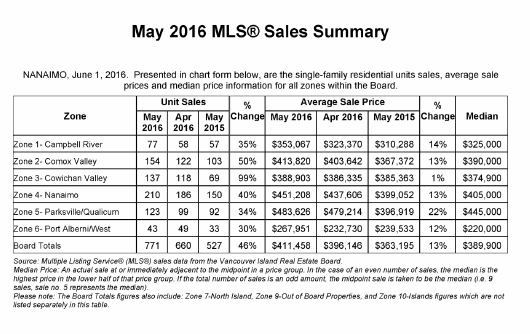 NANAIMO, BC – Home sellers are in the driver’s seat throughout the VIREB area as buyers compete for available listings.

Cameron Muir, BCREA Chief Economist, states that retail sales growth in the double digits reflects high levels of consumer confidence, which is spilling over into real estate. Tourism on Vancouver Island also posted a huge spike recently, which aids local economic conditions. However, although housing demand is extraordinarily high, its foundation is solidly based on a healthy GDP and rising population growth.

“British Columbia’s GDP is at three per cent, and employment growth rose around 3.5 per cent in the first four months of 2016,” says Muir. “Real estate is benefiting from that growth, with sales in the entire southern half of the province at record or near-record levels.”

Janice Stromar, VIREB 2016 President-Elect, confirms that the VIREB housing market is recording record sales in many areas. Multiple offers, particularly on single-family homes, are the norm rather than the exception. Low inventory levels are still a major challenge for REALTORS® and buyers for a variety of reasons.

“This is a fantastic time to sell, but some homeowners have been holding back because they love their home or are worried they won’t find another property to buy,” says Stromar. “More houses are now coming onto the market, but buyers snap them up so quickly, we still don’t have enough inventory to satisfy the demand.”

Despite increases in both the benchmark and average prices over the past year, the Vancouver Island housing market is still an affordable alternative to Victoria and Lower Mainland communities.

“Although retirees frequently choose to migrate to Vancouver Island, we are seeing younger professionals trading in their homes on the Lower Mainland for a significantly nicer property here,” says Stromar. “I wouldn’t call it a trend, but it’s becoming more common if people can find jobs on the Island or telecommute to jobs in Vancouver all or part of the time.”

Stromar adds that in a competitive housing market, connecting with a local REALTOR® is crucial to ensure you develop a winning strategy for buying or selling your home.