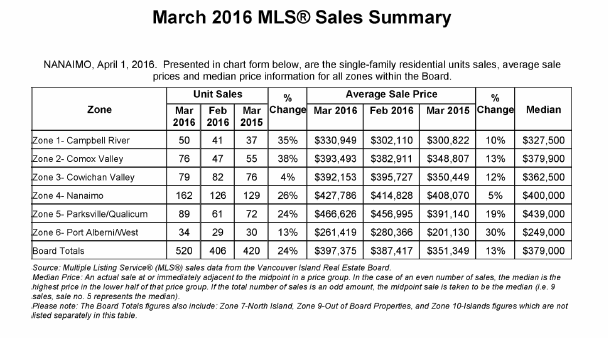 We are very happy to see a busy spring real estate market! The Vancouver Island Real Estate market is expected to continue to be brisk into summer, so if you are considering selling your home, there is still time. There are not enough listings to show the buyers who are looking! Call to discuss the possibilities: (250) 246-0708

FOR IMMEDIATE RELEASE
April 4, 2016 NANAIMO, BC – The Vancouver Island real estate market set a brisk pace in March, with buyer demand outpacing supply in most areas.

BCREA Economist Brendon Ogmundson states that the robust market conditions occurring throughout the province are reflective of British Columbia’s vibrant economy. The provincial economy is the strongest in Canada, with GDP growth expected to be around three per cent this year. Extremely strong construction activity, surging retail sales, and the highest job growth in three years are key economic drivers fuelling the bustling real estate market.

“Although we’ve been saying that the housing market can’t continue at this pace indefinitely, there are no signs that point to a slowdown,” says Ogmundson.

Ogmundson notes that although single-family homes are still the most popular property type, changing demographics could shift that trend in the next decade.

“Over the next ten years, there will be around 200,000 people between the ages of 20 and 49 in the province, so we expect that demand for townhouses and condominiums will increase,” says Ogmundson.

VIREB President Margo Hoffman reports that it has been several years since REALTORS® have been this busy, but low inventory continues to be a major challenge for REALTORS® and home buyers in the VIREB area. Multiple offers, particularly on single-family homes, are common occurrences.

“Our market is in definite seller’s territory, and we just don’t have enough inventory,” says Hoffman. “Homeowners may be reluctant to sell because they love their home and where they live. However, if you’ve been thinking of selling, it’s a perfect time to put your home on the market.”

Despite rising prices, Hoffman notes that the VIREB housing market is still very affordable compared to Victoria and Lower Mainland communities. Whether you are a buyer or seller, Hoffman also notes that a REALTOR® is a vital partner in the sales process to ensure you price your home appropriately for selling and pay the right price when buying.

VIREB represents nearly 965 REALTOR® members in approximately 90 member offices on Vancouver Island (north of Victoria).
VIREB cautions that average price information can be useful in establishing trends over time, but does not indicate the actual prices in centres comprised of widely divergent neighbourhoods or account for price differential between geographic areas.
Trademarks are owned or controlled by The Canadian Real Estate Association (CREA) and identify real estate professionals who are members of CREA (REALTOR®) and/or the quality of services they provide (MLS®).